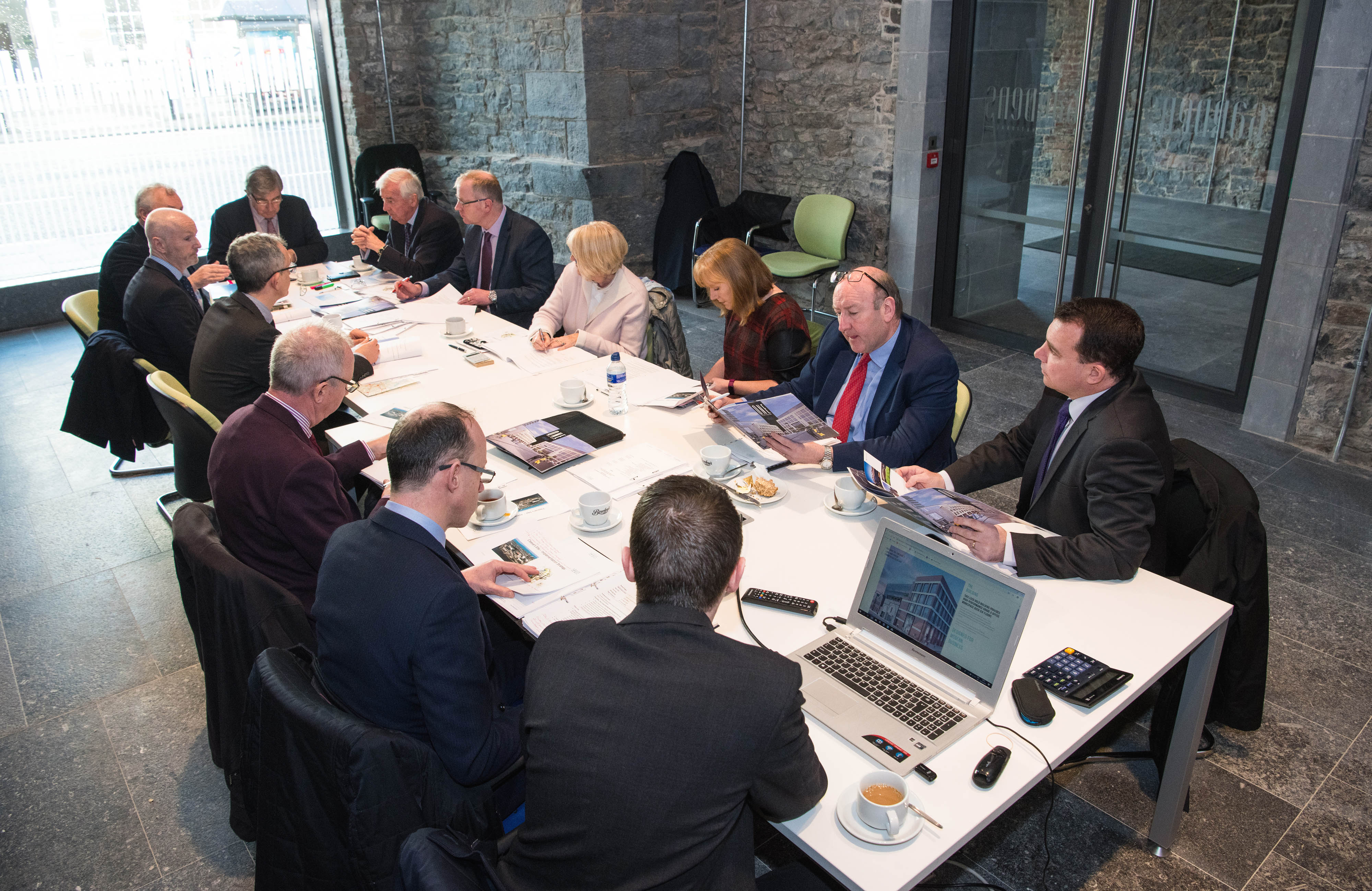 Wednesday, 06 March 2019:  Limerick’s world-class new office space, Gardens International, has hosted its first piece of business with the very board that led its redevelopment having the inaugural boardroom meeting there.

Limerick Twenty Thirty DAC has transformed the 80,000 sq ft facility from a skeletal relic from the downturn just two years ago into a state-of-the-art office facility on a par with the very best of high-end office/commercial developments in the world’s leading cities.

The board of the Limerick City and County Council’s special purpose development company took the opportunity to inaugurate the new boardroom as it held its March monthly meeting at the facility.

Developed at a cost of €23m, the project is now at pre-fit out stage for its first tenant, Nordic Aviation, which will start its move into the facility shortly.

The building brilliantly blends Limerick’s historic ‘Hanging Gardens’ with a structure that was left half-built at the end of the boom as the project stalled mid-flight in the downturn.

Limerick City and County Council subsequently purchased the property and transferred it over to Limerick Twenty Thirty to make it the first major development project under its remit and the results, just two years later, are now to be seen.

Said CEO David Conway, “Our monthly board meetings are very important gatherings but today was particularly special as we got to have the very first meeting in the boardroom of the first major development we have undertaken.  It was a fitting start as the boardroom brilliantly reflects the wider standard at Gardens. 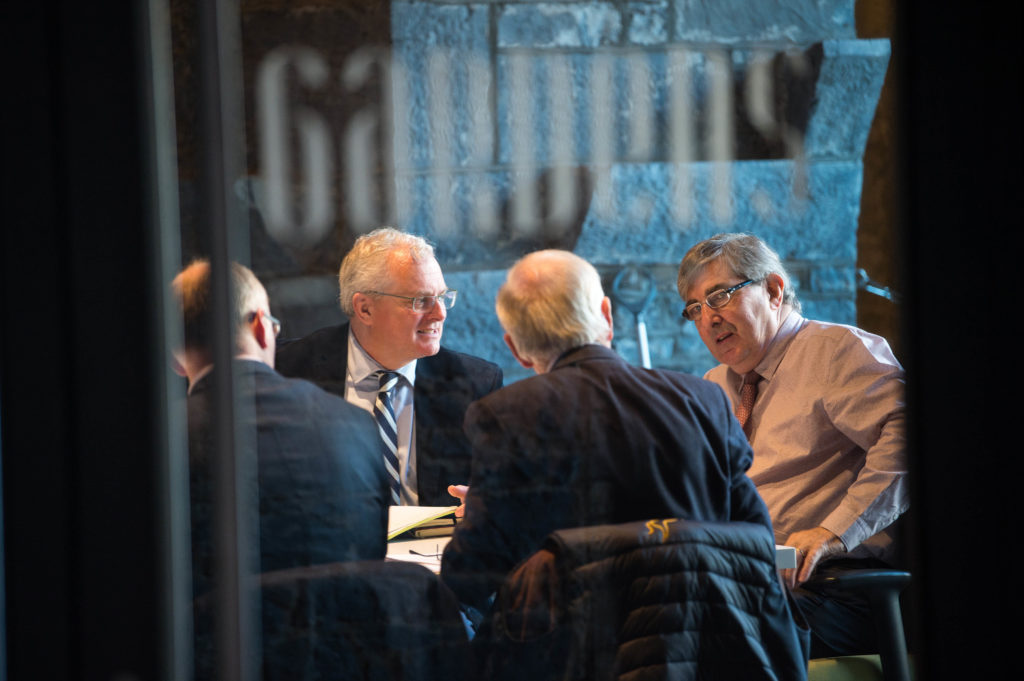 05/03/2019
Gardens International up and away as first meeting held in stunning boardroom today by Limerick Twenty Thirty.
Pictured is Limerick 2030 Chairman Denis Brosnan, right, in conversation with members of the board including David Conway, Chief Executive Officer, left.
Photo by Diarmuid Greene

“It’s equipped with the very best boardroom technology but it’s the architecture that will catch people’s attention.  It’s got a stunning vaulted red-bricked ceiling dating back to the late 1900s arching over a space brilliantly lit by the natural light coming in through the huge window off Henry Street.  We’ve even got an old 19th-century turret style stairwell off it.

“The entire project is finished to the highest international standards as a ‘LEED Gold’ building.  This is means it reaches the top international sustainability standards, a level that you would only typically see in top global cities.  We set out to build the best to attract the best to Limerick.

“The building is now at pre-fit out stage, and our first tenant will embark on fit-out very shortly, but the main circulation areas are stunning.  The board got a tour of the wider building today and there was great excitement as they saw the standard and style that it is finished to, including our roof-top garden, which reflects the building’s historic past.” 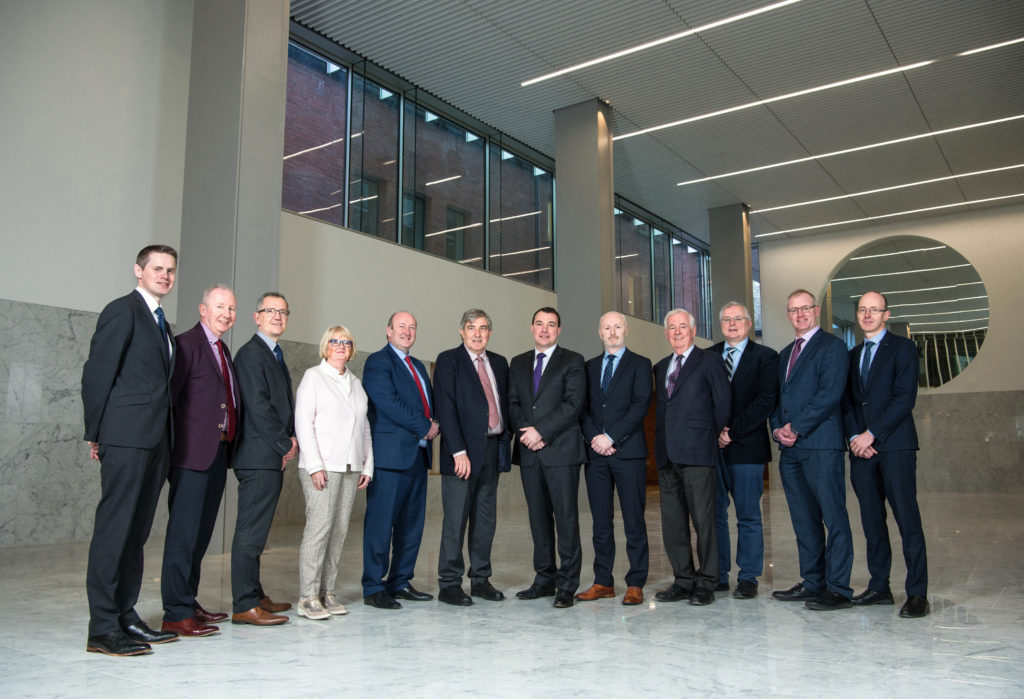 He added: “Gardens is our first major project, but we have started as we mean to go on. This is going to be a much talked about building, both locally and nationally.  That’s the standard we wanted to set, and it’s great to have arrived at this moment.”