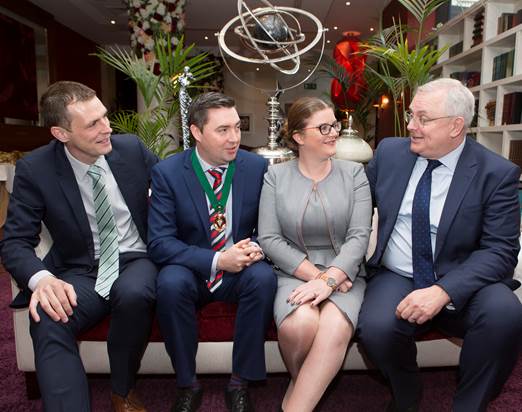 Business Leaders from across Munster attended the ACCA Business Leaders’ Forum at the Savoy Hotel in Limerick to hear the most recent developments on ‘Limerick 2030’ which is set to see €500m invested in the regeneration of the City.

CEO of Limerick 2030, David Conway was the keynote speaker and outlined his organisation’s plan for economic growth. With a call to local business leaders he provided an update on the progress that has been made since work began on the first Limerick 2030 contract in April 2017.  Commenting on the initiative, David Conway said, “Our goal is to develop key strategic sites in Limerick City and surrounding county that will act as anchors for enterprise and investment development.”

“In a relatively short time, we’ve already seen one of those sites, Troy Studios in Castletroy, become fully operational and we are well advanced on work at Gardens International, a remarkable and historic building that is being merged with a new structure to deliver Limerick’s first ever LEED Gold standard office block later this year.  We’ve also seen €170m in funding secured to develop the Opera Site and have begun working on concepts for the Cleeves Riverside Campus project. There is great momentum building in the Limerick city region and it is important now that business leaders across the City put their weight behind the project to ensure its success over the next ten years.”

The project has already seen an €85million investment from the European Investment Bank which marks EIB’s largest ever urban investment in Ireland and its first to a local authority programme in Ireland since 1993. On this, Chair of ACCA Munster, Phillip Maher emphasised to those present that, “By backing the Limerick 2030 development initiative business leaders will be creating a confidence in our city that will help attract not just local but global investment to the South-West region.”

Incoming Chair of ACCA Ireland and Director with BDO accountants, Stephen O’ Flaherty who lives and works in the City added, “Limerick is on a journey of regional development and with the momentum of the 2030 project businesses will now see tangible and exciting opportunities in the medium to long term. As a professional body that has in depth understanding of business’ needs we will bring national and international insights to bear to help companies and organisations maximise these new opportunities.”