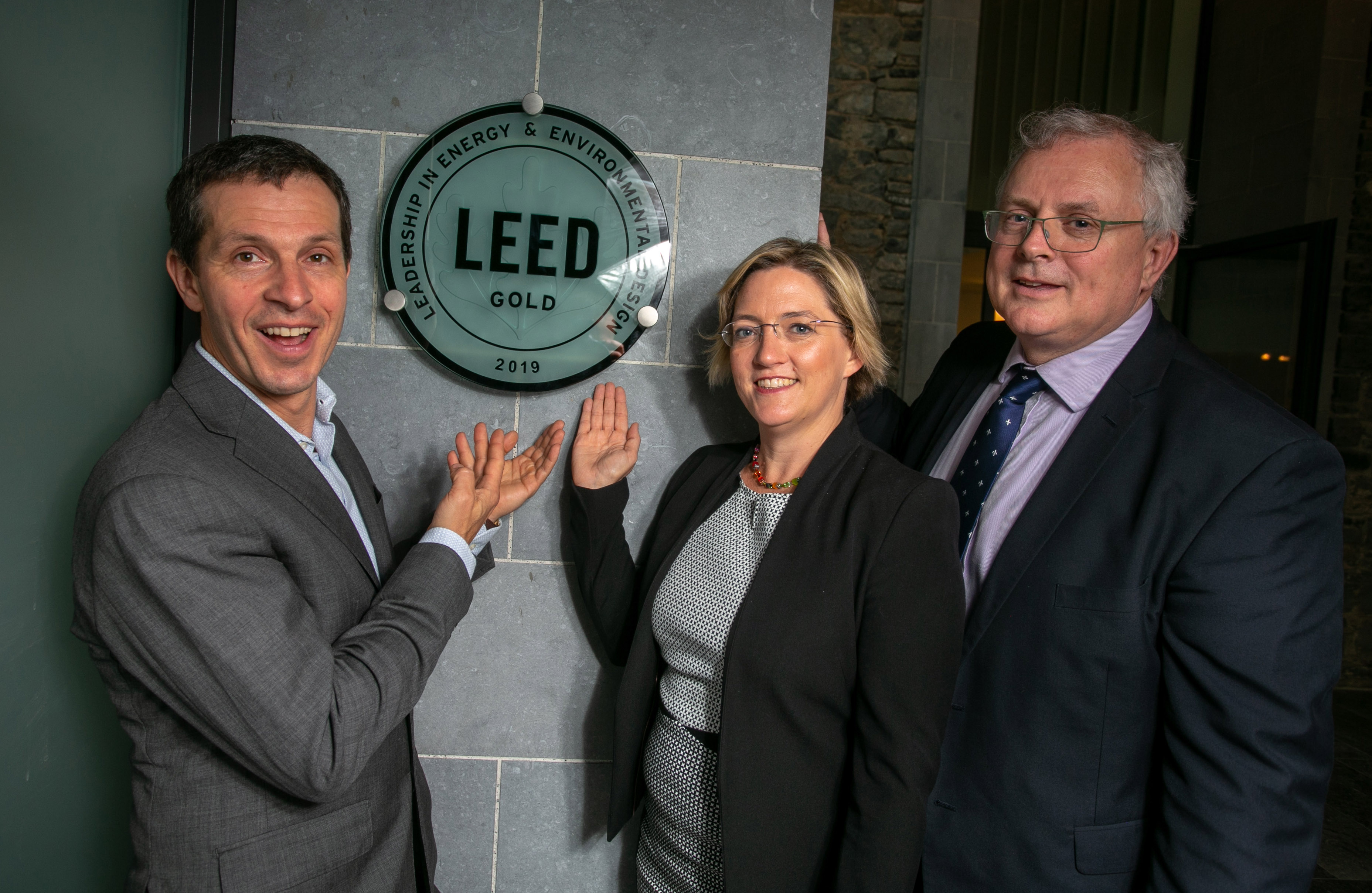 Posted at 11:09h in Gardens by Limerick Twenty Thirty

One of Europe’s leading experts in energy usage and environmental design has attributed Gardens International with setting a new standard for sustainability in Limerick.

GBCI, which oversees the LEED certification process, is the premier organisation independently recognising excellence in green business industry performance and practice globally.  Mr Killmann travelled to Ireland to view new buildings that have achieved the LEED standard, including the Henry Street development.  Gardens International was opened in March following an 18-month build and its first tenant will be in place later this year.

Giving his first impressions of the building, which has mixed an historic and iconic old Limerick building with a modern design, Mr Killmann said: “When I walked up the street, it popped out; this architecture combining existing and new. I believe for people that pay attention, that live here, this is the first step towards redeveloping and revitalizing the core of the city.

“If you’re working in an office environment, you’re spending almost 90 percent of your entire day inside. We’ve all become experienced with getting tired because of bad ventilation, of having a dark workspace because of little or no windows, of having smells in buildings because of fresh paint or carpet.  The LEED standard addresses all these criteria and makes sure there is no hazardous impact for people who work there. They are not just environmentally sustainable but they are healthy.”

He said that among the key elements of the building that had stood out in terms of LEED criteria were the green roof, ‘day-lighting’, reduction in water consumption and ventilation. “This is a state-of-the-art building,” he said.

Going green and being sustainable are, he said, no longer a fringe issue, they are an imperative.  “This is the new standard. It’s actually becoming more a requirement than an option.  On one end, the investor wants to make sure this is a building that can be leased and fully occupied as soon as possible. So, one checkbox to verify sustainability is LEED certification. As a tenant, you’re interested in a healthy environment, so your employees are happy employees.”

Accompanying Mr Killmann on the visit was Nellie Reid, Managing Director, Meehan Green (the LEED Consultant on the project) who said that Limerick City and County Council and Limerick Twenty Thirty have to be commended for going for this green standard.

“It was quite bold for them to take on an international green building certification for a project that had meant so much to the city for so long. It spread awareness about green building and why it’s so important. Also, something that’s so special with this building is the mix of the historic buildings and the new buildings. There is a clear contrast between the old and the new and the design team really did an amazing job pulling these two distinct design ethics together.

“This building, with the juxtaposition of the old and the new, is a perfect metaphor for what’s going on in Limerick and how the city is changing.  Also, this isn’t just a one off. This is the first step on a big redevelopment scheme that will see other Limerick Twenty Thirty redevelopments, including Project Opera, also implementing the highest standards in terms of sustainable building design.”

Limerick Twenty Thirty CEO David Conway said that the validation for the project from international experts was very reassuring for all involved in the project.  “This is the first major build project for Limerick Twenty Thirty and when we went for this top international sustainability standard, not many were aware of it.  Huge effort and no small expenses was invested in getting us here but it was clearly well placed,” he said.

“The environment is no longer a fringe issue now and is very much a local and national priority so we were clearly going in the right direction two years ago when we committed to reaching the LEED Gold standard.  It’s the standard that top companies globally want and we’re delighted to be able to provide it. And it’s not just about the investor, it’s about the people who will ultimately work here. They will have a healthy work space with a very low carbon footprint.  That’s two priorities looked after.”