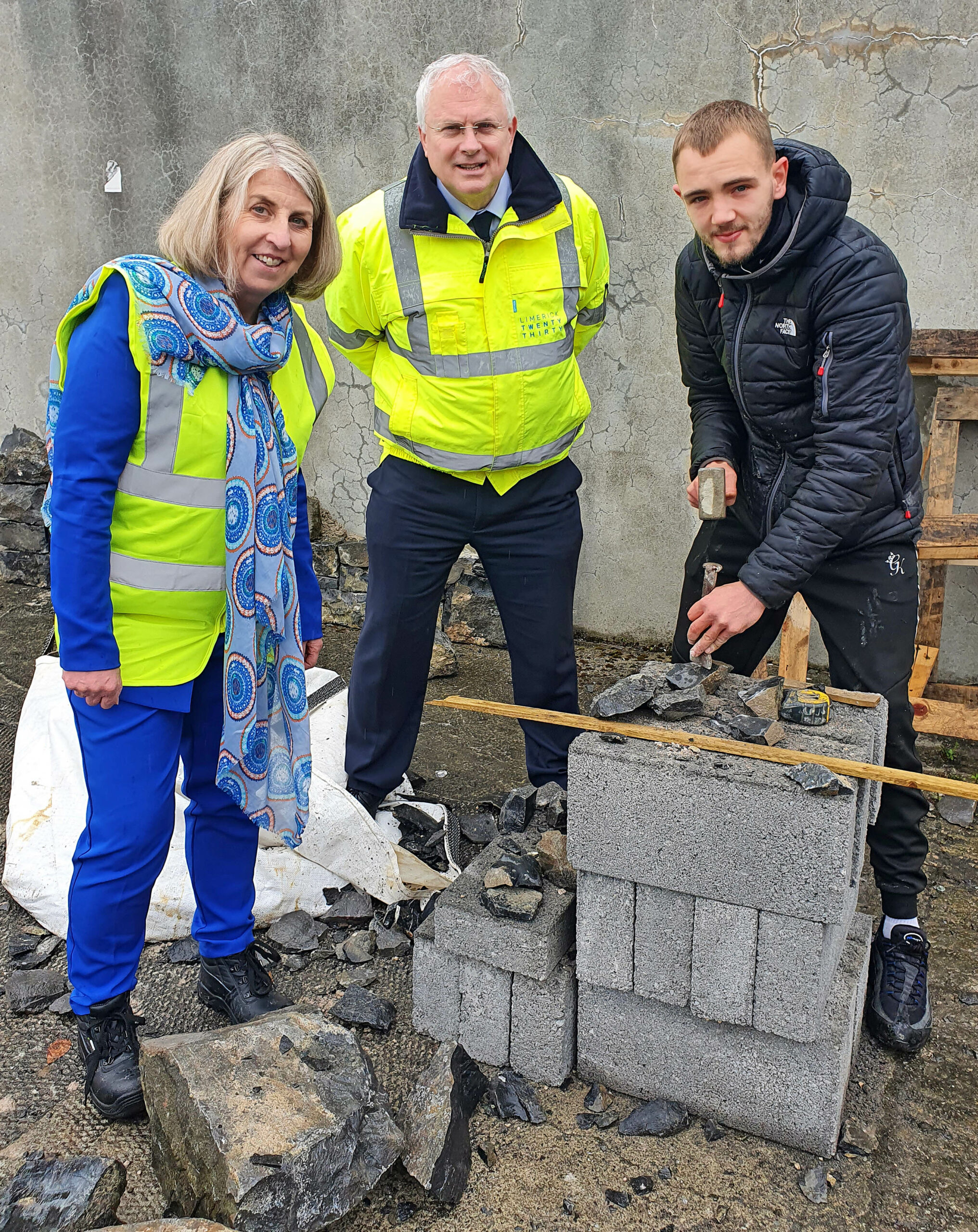 Posted at 08:25h in Opera by Laura Ledger

Old stone, brick and other materials otherwise ending up as waste now being reused across city and county
Thursday 14 April 2022: Limerick’s Opera Square is breaking new ground in the construction industry’s sustainability drive thanks to a unique reuse and repurpose programme that is giving new life to stone and brick that would otherwise be discarded.
In addition to the retention of 16 buildings deemed to be of historical importance on the site, conservation is also stretching to diverting huge volumes of materials from the demolition programme over the past 12 months into other projects elsewhere in the city and county.
In a novel three-way partnership overseen by the Southern Region Waste Management Office and in conjunction with Opera Square developer Limerick Twenty Thirty and demolition and works contractor John Sisk & Son, over 1,000 tonnes of stone and brick materials alone that would otherwise have been destined for landfill have been salvaged and are being put to good uses.
The ‘reuse’ programme commenced with what was the country’s first ever pre-demolition audit, which identified in advance of demolition works which materials could be reused.
Among the projects the materials have since been diverted to are the Foynes Flying Boat museum, the Canal Harbour Building and bridge and old stone wall repairs around the county. Significant volumes also have been diverted to training programmes for young stone masons, which has been supported by the Economic and Social Intervention Fund through Limerick City and County Council Regeneration programme.
It’s not just brick and stone that’s getting a new lease of life as other ‘reuse’ materials include palisade fence panels, which have been sent to Richmond Rugby Club; the metal gate and stone pillars from the entrance to the Granary Building, which are currently with the Civic Trust and items such as the historic limestone door case at 6 Rutland Street and cobble stones retained on site for future use. Modern materials have also been segregated for reuse on the development including carpet tiles, ceiling tiles, timber, and glass.
The materials have been drawn from the site since the demolition and enabling works on the 1.62hectare project a year ago. Opera Square is the largest single commercial property development undertaken outside the capital. The construction programme will see up to 500 people employed at peak output on the site. When fully developed, the site will have the capacity for up to 3,000 employees across a 550,000 sq ft campus accommodation plus carparking and ancillary areas. The programme will take up to six years to complete at an estimated cost of €250m.
Philippa King, Coordinator with the Southern Region Waste Management Office – which oversees waste strategies for seven local authorities in Munster as well as Carlow, Kilkenny and Wexford – said that recycling and reuse programme has the potential to be a template for major projects involving large-scale demolition.
“Outlets for construction and demolition waste are limited, so we had to explore alternatives to waste creation and did this from the very outset with the Opera pre-demolition audit. The focus has ultimately been about diverting as much from waste as possible and we were not just talking about reuse alone but also repurpose and remanufacturing as well. Our goal was to maximise resource recovery on site as the buildings were demolished and I think we’ve achieved that. A key objective for Limerick today is to embrace international environmental best practice on the circular built environment and what’s happening at Opera is a great example of that.”
David Conway, CEO at Limerick Twenty Thirty, said that sustainability is integral to all its projects. “We have already set a new standard in terms of sustainable development with our first project, Gardens International, and we are going to maintain that standard with the Opera Square site and with the Cleeves Riverside Quarter and every single project we work on, big or small. However, what this project shows is that we are not alone going to have an environmentally proofed finished product but every step along the way is going to be as sustainable as possible.”
Shane O’Donovan, General Manager – Special Projects with contractors John Sisk & Son said, “Pretty much anything we can reuse on site is staying here. Of the other materials, we’ve managed to recover over 1,000 tonnes. We’re delighted to see it being reused and we’re also very happy that some is being used in training apprentices in the use of stone and stone masonry. The apprentices are cleaning and dressing the stone and preparing it for reuse on projects around the city and county such as wall repairs and graveyards and the like. That’s a really positive output as well.”
Ends